Sending async data from Rails into the world

Exceptions and business metrics. These are two common use cases involving delivery of data from our Rails application (or any other web application) to external services that are not so crucial and probably we would like to send them asynchronously instead of waiting for the response, blocking the thread. We will try to balance speed and certainty here, which is always a hard thing to achieve.

This is a series of posts which describe what techniques can be used in such situation. The first solution that I would like to describe (or discredit) is ZMQ.

ZMQ - the holy grail of messaging

What is ZMQ ? According to the lengthy and funny ZMQ guide:

ØMQ (ZeroMQ, 0MQ, zmq) looks like an embeddable networking library but acts like a concurrency framework. It gives you sockets that carry atomic messages across various transports like in-process, inter-process, TCP, and multicast. You can connect sockets N-to-N with patterns like fanout, pub-sub, task distribution, and request-reply. It’s fast enough to be the fabric for clustered products. Its asynchronous I/O model gives you scalable multicore applications, built as asynchronous message-processing tasks. It has a score of language APIs and runs on most operating systems. ØMQ is from iMatix and is LGPLv3 open source.

You can also watch an introduction to ZMQ delivered by one of the creators of this library: Martin Sustrik: ØMQ - A way towards fully distributed architectures

It seems like a perfect candidate at first sight, so let’s dive into this topic a little bit.

How would that work ?

I believe that we could use diagram here. 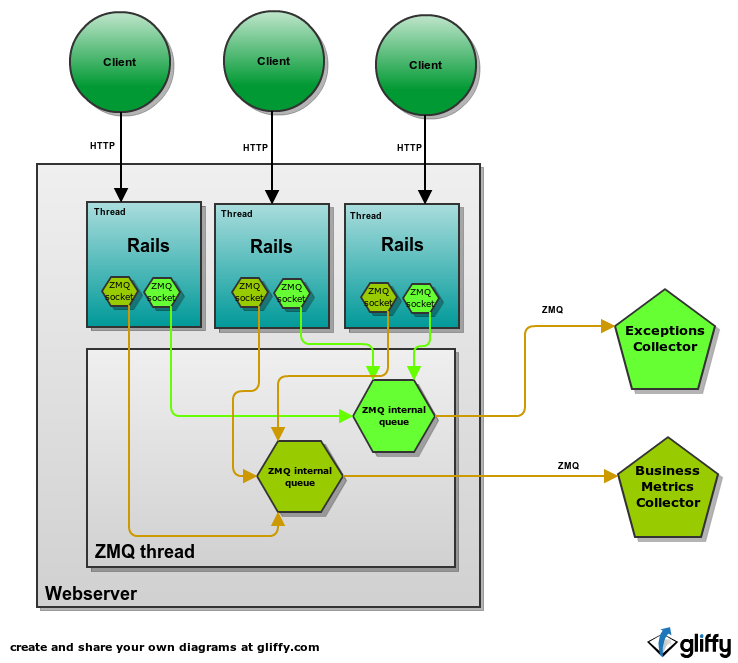 Every rails thread (I assume multithreading app here, but it does not matter a lot) would have a ZMQ socket for sending exceptions and business metrics. Sending a message with such socket means only that it was delivered to ZMQ thread which will try to deliver it further.

If you are building a solution and would like your customers to send you some data from their applications, ZMQ is probably not the way to go.

Another common way of solving this problem is to have separate process which your application communicate to. That process receives events from your app and sends them further to the external service. 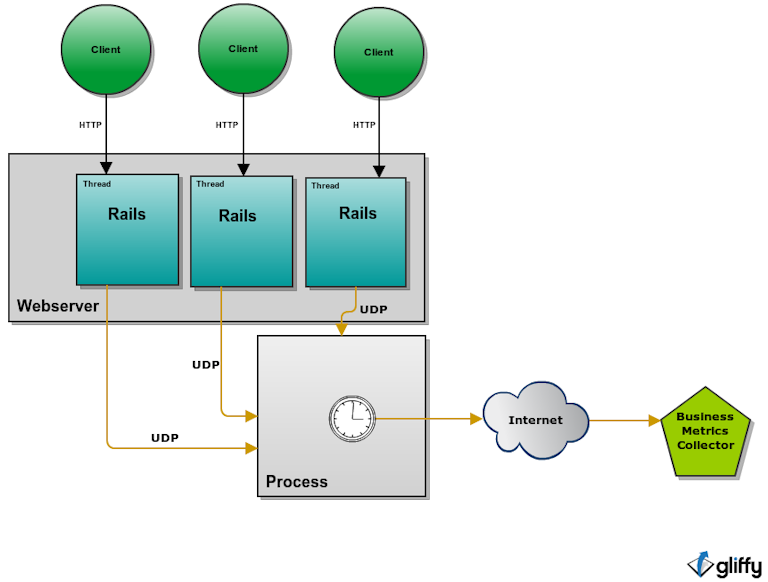 Rails application can communicate with the process running in customer infrastructure using any protocol it wants. That could be for example ZMQ or UDP if we value simplicity. That process is then responsible for delivery of events to the external service. This is a common pattern in business metrics solutions. Application can send huge number of events to the process who is responsible for aggregation and periodically sends aggregated data further.

There could be benefits of using such architecture for exception delivery. The middle process is a very good candidate to put in the responsibility of doing retries with exponential backoff strategy.