Do you have a framework for dealing with emergencies?

In my pre-Arkency life, I worked for a corp.

Keep in mind that it was my very beginning of the commercial-IT world. I sometimes felt lost inside this huge DevOps machine. Lost and alone - as usually, when something breaks, there was nobody to ask for help.

It had to happen. One day, by accident, I ran some kind of a DB-clean-up script, with the wrong date, on production. The script’s job was to delete records that are old enough. While fiddling with the script, I changed the definition of records old enough to records visible today (not closed). And accidentally ran the script.

My reaction - a complete paralysis. I wasn’t even sure what the script exactly did. Unfortunately, I had never found time before to analyse the script line-by-line. Also, I have never seen unit tests, so most likely they didn’t exist.

So I had no idea how much damage I caused. Maybe the script had a protection from so accidental usage as mine? It should have, right?

I took a look at the frontend to see if everything is ok - it wasn’t. Literally no data for today. It was present a minute ago but disappeared. Cool. They will fire me.

One of the managers visited me quickly and brought to book:

Where are my data? I need it NOW for my work. When will you restore it?

I already realized that I had to call an ex-coworker of mine (he was currently on vacation, but I had no choice…) to get all needed information. So my answer was:

I don’t know. In the worst case scenario, when he is back, so next week [4 days].

The end of the story was pretty lucky, though. I immediately got an accurate instruction from my coworker-on-leave - there was a daily backup of the data, so probably all we need is a casual restore from /a_directory.

A half-hour of preparation, with an extra pair of eyes and triple-checking if this time everything is ok - and voilà! The records are back! Only a few of them were lost forever (those inserted after the backup), but come on! You can insert them again! We saved the day!

Today, I’m not very proud of this situation. There were two good reactions, though:

What should I have done better?

Of course, easiest to say: You should simply don’t make such stupid things, but I’m afarid it’s impossible. We, in Arkency, are agreed - everyone makes mistakes. Smaller, larger, more or less foolish ones - but everyone does them. The professionalism doesn’t mean no mistakes, but rather as little mistakes as possible, asymptotically to zero; zero is unreachable.

Speaking of the art of professionalism - the true value of the developer is not how many mistakes they do, but how they recover.

What is a shame today?

It was my duty to tell the managers what happened. They shouldn’t have needed to visit me and inquire about the accident. I should have told them immediately:

An apology is nice here (it was clearly my fault), but useless without all above.

If necessary, I should keep them informed about the progress. Luckily, the recovery was so quick that the next message was, at the same time, the last one: Hey, it’s ok now, we only lost today’s records.

But staying quiet is never a good option.

I don’t know. In the worst case scenario, when he is back, so next week [4 days].

I didn’t lie. The problem is - such an information doesn’t tell very much. At the end of the day, the incident was solved after less than an hour! Why were the numbers so different?

Much better approach is to estimate with 3 values:

So I should have told:

All I did was telling only the third value. This was not the end of the world, if treated as an obligation (what the management often does). But the other two values were much less frightening, what should have been spoken.

Surprisingly, this time the most optimistic estimation was true. This happens very rarely, I consider this as a luck. Surely, next time my coworker won’t break his sunbathe.

That would be a dream. You have a list of things, step-by-step, what to do (and what not to do) in hard times. The list is very specific, but at the time it gives you some level of freedom in designated areas.

Handling emergencies is an individual matter. In depends very much on you as a programmer and as a developer, your habits, your team and your project. There are some hard rules here, like be verbose or give 3 values in estimations. However, it’s not exhaustive. There’s always a whole lot of unknowns.

You should have your own framework for such cases. Otherwise you are exposed to cases like this one above.

We described ours in Responsible Rails book. 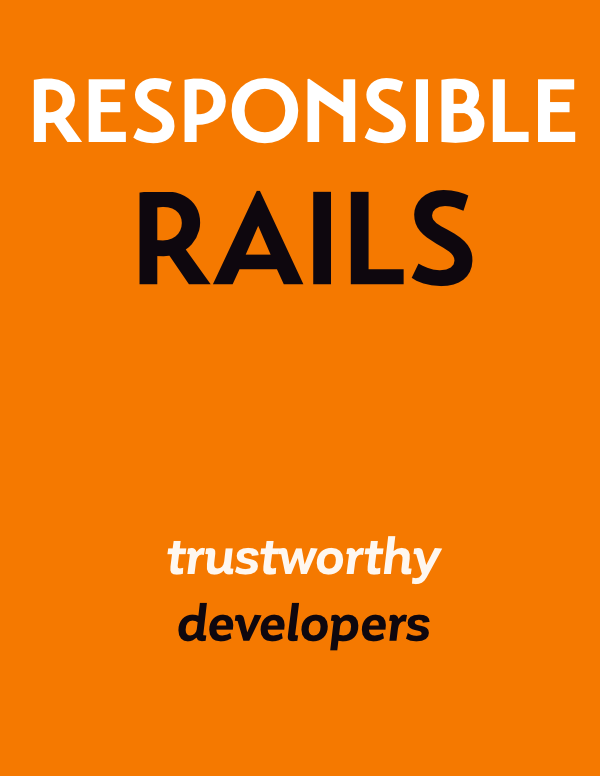 Tired of weekend works? Missing a framework for handling emergencies? Looking for advice how to mitigate the number of production accidents?

Sometimes you can observe that you change the habits during emergency - maybe it’s time to reconsider your beliefs?