Just yesterday, I finished reading Understanding the Four Rules of Simple Design written by Corey Haines. I definitely enjoyed reading it. The examples are small, understandable and a good starting point for the small refactorings that follow. It’s a short, inexpensive book, but dense with compressed knowledge, and I can only recommend buying it. You can read it in a few hours, and contemplate it for much longer.

One of the examples inspired me to write this blogpost about higher level concepts. What does that even mean? Especially in terms of programming?

First, let’s have a look at this example: 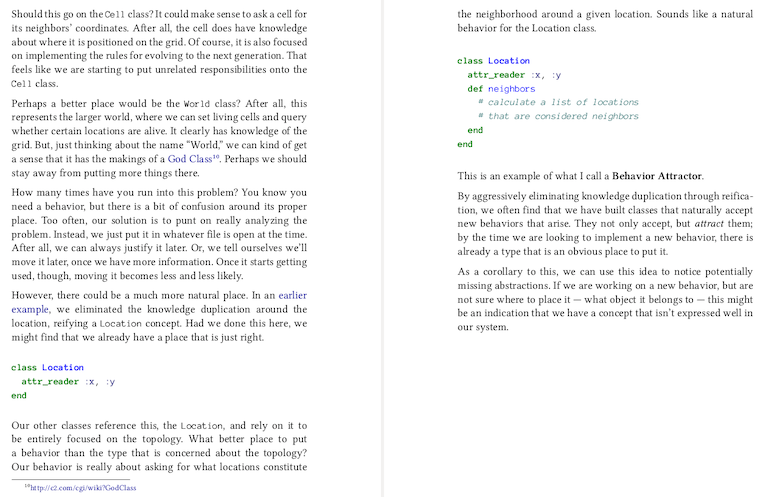 Now you know a bit of the story related to the example from the book.

I looked at it and I was like: hey, how would that even work?… This is not the right place for this method. It should be in ... I won’t tell you yet, because I quickly realized that it could actually work…

This Location is basically just a Value Object and it could return all neighbour locations as value objects as well. Let’s try to implement that.

This makes sense if you assume an infinite, 2-dimensional Map of square cells, which is the default for Conway game of life. But whenever you say Game to me, first thing I think about is Civilization 5 and its hexagonal Map. 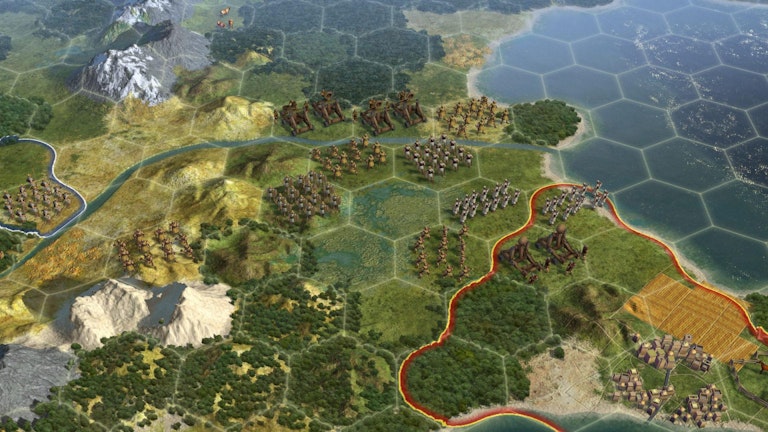 When you say Game to me, especially board game, I think players, maps, movements, rules. Not all of those things make sense for Conway game of life because it is a zero-player game but I think the intuition of Game still applies.

When discussing a different code example in the book, Corey reverses the dependency between two objects. Instead of Cell knowing its location

Now the location can know what cell is on it, thus becoming a Coordinate:

So when I think about location neighbors I start to wonder:

What is the better dependency direction here?

Did we miss the concept of Map perhaps? Could we gain something by adding it? Would it be more or less intention-revealing? These are good questions to ask.

I think games are particularly hard to implement right because there are many rules and behaviors that often require knowledge about pretty much anything else that’s happening in the Game. Corey explains it nicely at the beginning of the book when he talks about the better design concept.

A few months ago I wrote a blogpost that shows how to implement a custom YearMonth class in Ruby that would work with ruby Range.

Basically YearMonth knows how to compute its successor, the next YearMonth. It also works nicely with iterating and comparison.

It was pointed out, however, that I was missing a higher level concept: a Calendar. Days, Weeks, Months, and Years don’t exist in a vacuum, but are parts of something bigger: passing time, which we follow by using a Calendar.

And I agree. There are even different kind of calendars in use. I am not sure yet if I have an intuition how to design a good Calendar class with a useful API. And how would I do that so that all chunks of knowledge don’t land in the Calendar class, but only in one proper place?

I was once writing an application for managing employees’ holidays. In Europe you are allowed a certain number of free days depending on how long have you been working, both in your life as a whole and for that particular employer (and other factors as well).

The application that I was working on was meant to be deployed separately to every company. So some of the queries that I wrote were executed across entire sets in database, without scoping per company because the data was meant to be for that one company. That made the code easier in some places, because I could query things globally when verifying the correctness of some business rules.

One pivot later, the product was an SaaS intended to be deployed in one place but to support multiple companies. The concept that I was reluctant to introduce immediately became necessary. Everything had to be scoped per company for each employee currently using the system. It was a multi-tenant application.

Employees don’t live in a vacuum either. There are parts of a company hiring them. I was writing software for helping companies manage holidays for their employees and there was no concept of the Company anywhere in the code. That was the higher-level concept I was missing.