You can use CoffeeScript classes with React - pros and cons

One of the big advantages of React components is that they are easy to write. You create an object literal and provide functions as fields of your object. They you pass this object to a React.createClass function.

In the past React.createClass was a smart piece of code. It was responsible for creating a component’s constructor and instantiating all fields necessary to make your plain object renderable using React.renderComponent. It was not an idiomatic JavaScript at all. Not to mention it broke the basic SRP principles.

It changed with a 0.12 version of React. React developers took a lot of effort to improve this situation. A new terminology was introduced. React.createClass now does a lot less.

One of the most important change for me is that now you can use CoffeeScript classes to create React components. Apart from the nicer syntax, it makes your code more idiomatic. It emphasizes the fact that your components are not a ‘magic’ React thing, but just CoffeeScript objects. I want to show you how you can use the new syntax - and what are pros and cons of this new approach.

Starting from React 0.12 the new terminology is introduced. There are now elements - they are an intermediary step between component classes and components. Since before 0.12 children type was not formally specified, we have a new term for that - it is a node now.

There is also a fragment concept introduced, but it is beyond the scope of this blogpost - you can read more about it here.

As I said before, previously React.createClass made a lot of things. It made your object renderable by adding private fields to an object passed. It made a constructor to allow passing props and children to create a component.

Now all this functionality is gone. React.createClass now just adds some utility functions to your class, autobinds your functions and checks invariants - like whether you defined a render function or not.

That means your component classes are not renderable as they are. Now you must turn them into ‘renderable’ form by creating an element. Previously you passed props and children to a component class itself and it created an element behind the scenes. This constructor created by React.createClass now needs to be called by you explicitly. You can do it calling React.createElement function.

This is a signature of the React.createElement function:

Where type can be a string for basic HTML tags ("div", "span") or a component (like in the example above). props is a plain object, and children is a node.

A node can be:

Node is just a new fancy name for arguments for children you know from previous versions of React.

This is a bit verbose way to create elements from your component classes. It also prevents you from an easy upgrade to 0.13 if you are not using JSX (we got this process covered in our book). Fortunately, with a little trick you can use your old Component(props, children) style of creating elements.

React provides us React.createFactory function which returns a factory for creating elements from a given component class. It basically allows you to use the ‘old’ syntax of passing props and children to your component classes:

Notice that you can still use React.DOM like you’ve used before in React. It is because all React.DOM component classes are wrapped within a factory. Now it makes sense, isn’t it?

Also, JSX does the all hard work for you. It creates elements under the hood so you don’t need to bother.

There is a trend in the React development team to put backwards compatibility into the JSX layer.

All those changes made possible to have your component classes defined using a simple CoffeeScript class. Moving the responsibility of “renderable” parts to createElement function allowed React devs to make it happen.

If you want to use class syntax for your React component classes in ES6, it is simple.

Notice that getInitialState and getDefaultProps functions are gone. Now you set initial state directly in a constructor and pass default props as the class method of the component class. There are more subtle differences like that in class approach:

As you can see, this approach is more ‘CoffeeScript’-y than React.createClass. First of all, there is an explicit constructor you write by yourself. This is a real plain CoffeeScript class. You can bind your methods by yourself. Syntax aligns well with a style of typical CoffeeScript codebase.

Notice that you are not constructing these objects by yourself - you always pass a component class to createElement function and React.render creates component objects from elements.

Pure classes approach brings React closer to the world of idiomatic Coffee and JavaScript. It is an indication that React developers does not want to do ‘magic’ with React component classes. I’m a big fan of this approach - I favor this kind of explicitness in my tools. The best part is that you can try it out without changing your current code - and see whether you like it or not. It opens a way for new idioms being introduced - idioms that can benefit your React codebase.

“Rails meets React.js” gets an update! 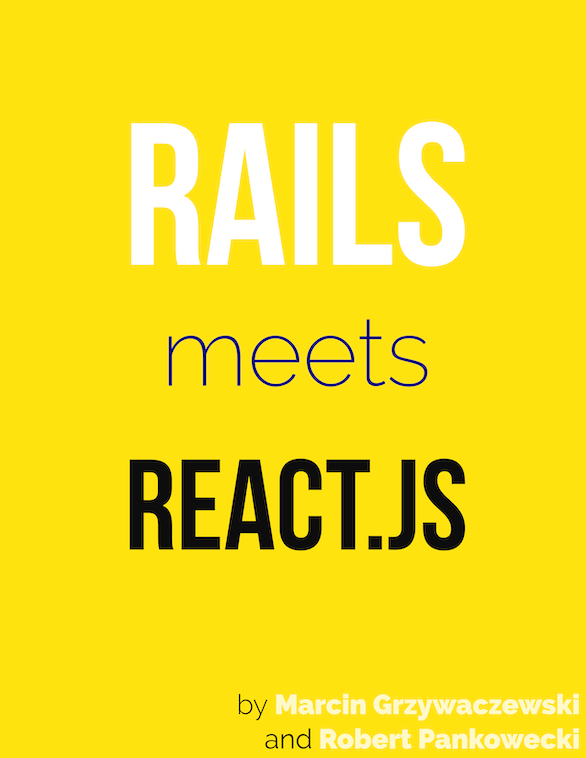 We are going to release a “Rails meets React.js” update with all code in the book updated to React 0.13 this Friday. All people who bought the book already will get this update (and all further updates) for free. It is aimed for Rails developers wanting to learn React.js by example.

Interested? Grab a free chapter or watch a quick, 3-minute overview of it now. You can buy the book here. Use V13UPDATE code to get a 25% discount!

Join the group of 350+ happy customers who learned how to build dynamic user interfaces with React and Rails!