At Arkency, we subscribe mostly to the remote and asynchronous approach to software development. I described this method in detail in “Async Remote. The guide to Build a Self-Organizing Team”, a book I co-wrote with Robert Pankowecki. Most of the insights and views expressed in the publication were based on our own experience but we also drew on some ideas borrowed from other companies. Truth be told, when we first started, there weren’t really that many remote companies to be influenced or inspired by. We learned a lot from open-source projects, the way they build their teams and how they collaborated asynchronously.

In this post, however, I would like share and review some ideas from a book called “Remote Mob Programming” written by Jochen Christ, Simon Harrer and Martin Huber, senior programmers at Innoq, which is dedicated to… you guessed it… mob programming and how it can be done remotely. I like this publication a lot although, to be honest, it’s super short - only 30 pages, including some additional resources. If you, however, like quick and concise reading that lets you focus on a number of key ideas, you should certainly grab it. There are some lessons to be learned from the book - It has certainly inspired me to look at the things we do at Arkency from a different angle.

For those of you who don’t know - mob programming is a software development approach based on a whole team working together on a single task at the same time and at the same place. Some of you may be familiar with pair programming - it’s a situation when two people sit together in front of one computer and they program together, with one person typing and the other one navigating. It’s a very unique way of working, certainly not for everybody. I used to work this way at a London company, before I started Arkency. We paired all the time, it was a very exhausting and intense process but quite rewarding. I personally think it’s not a bad approach to creating software.

Then there’s mob programming. It usually means working in front of one screen, but, unlike in pair programming, there are more than two people involved. The main idea behind this method is that it can be done in the office. We have tried this approach a few times at Arkency, including one time when we had a co-working session at my house. There were five of us working on a big TV screen, moving around the keyboard. We were working on a sample application for our Domain Driven Design workshops, creating the initial design, adding tests, etc. As a method consisting in many people working at a single workstation, mob programming has some consequences, both positive and negative. Intuition may tell us that working like this could be a waste of time - what with five people working concurrently on the same task. But this approach has some benefits as well.

We came to realize that mob programming is superior to anything we’ve ever tried before, claim the authors of “Remote Mob Programming” in the introduction to the book. That’s quite a bold claim to make and it’s interesting to see that comparing office work to some other ideas, including remote work without mob programming, didn’t change the writers’ minds.

The three senior programmers did full-time mob programming every day for a year, which to me seems like enough time to draw conclusions. An interesting consequence of the approach was that for one year the team didn’t have to rely on daily stand-ups. They were not needed, as everybody already knew what had been done and everyone was on the same page all the time. Moreover, there were no code reviews.

At Arkency, we don’t really do mandatory code reviews anyway. I know, it’s quite controversial. A lot of other companies, however, seem to construct their processes around code reviews so there is always some waiting involved. When developers create code, they are not allowed to push it into production before it gets reviewed.

The one-year “mob programming experiment” also meant no hand-overs before holidays. Normally, when one of the developers takes some time off, for example, to go on holiday, someone else has to step in and take over their task. At Arkency we do this through collective ownership but this is not a solve-it-all approach so I can understand why the method suggested by the writers makes sense. Finally, the authors address the problem of working in isolation - using remote mob programming approach can prevent programmes working at home from feeling alone. Right now many of us in the industry are working remotely full-time for the first time in our lives and there are lots of things that we can learn from this experience.

Christ, Harrer and Hubethe give us a number of rules to follow when working remotely. Here are some I found most interesting:

Mob programming is certainly an idea to consider. At Arkency we might combine the different modes of working and try to mix some of the ideas of remote async work, mob programming and even live streaming. There’s definitely a lot to explore in this area. The lockdown has forced us to seek new effective ways of working and enhanced our creativity.

Do you remember how you decided to blog more?

Was it 2 years ago? 3 years ago? Look at your blog now. What has gone wrong? This book is the essence of our blogging experience. You will find many techniques to save time while blogging, including time-boxing, starting from the middle, and more. 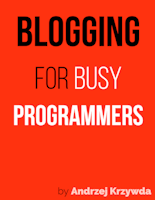