That one time I used recursion to solve a problem

Some time ago I was working on a problem and I could not find a satisfactory solution. But it all turned out to be much simpler when I reminded myself about a tool that I rarely use: recursive function.

You see… The iterators from Ruby’s Enumerable and queries from ActiveRecord are so nice that you barely need anything different than each to solve a problem. And here I was trying to use each in 5 different ways, in various different approaches failing again and again.

The story goes like this. Your platform sells a ticket to an event. It might be for example a race or a marathon or other something completely different. Some of those competitions are pro or semi-pro and they are announced and purchased even 2 years upfront.

The attendees (or should I rather say sportspeople) need to provide sometimes quite a lot of additional, mandatory data that the organizer asks for. It can be the name of your team, your age, your personal best record, etc. That kind of data. Which can also change over time…

Also for many other kinds of events, the platform offers additional services such as insurance (in case an accident prevents you from going to an event) or postal delivery (lol, yep). Some kinds of those services require plenty of additional data as well. We don’t ask for them before purchase because that would lower the conversion. So we ask about them after a purchase, on the very first page after you pay. However, some customers (so happy that they bought a ticket) don’t provide this data immediately.

This can have various consequences. It might mean their insurance is not valid yet, it might mean that the organizer does not have all the necessary information about them. Or it might mean we can’t send them those tickets via postal like they wanted. But we don’t want our customers to experience these problems. We want them to be happy and get what they paid for. So we have implemented reminders. From time to time they should receive an email to fill out missing data. But not too often (because that’s annoying) and not rarely (because they might miss them).

Also… The reminders work best close to the purchase (just after it, when customers still remember what’s all the fuss about) and close to the date of the actual event (you are more concerned about providing proper data 1 week before a match or a race than 1 year before yet). The reminders are obviously not sent anymore when you provide all the necessary data.

I wanted to implement an algorithm that would schedule reminders progressively less often going from the moment purchase towards the event date. And similarly in the other direction from the event date back to sales date. And they both should meet somewehre in the middle. On a timeline, it would look like this.

At the beginning all of my approaches were similar. Almost identical. I split the timeline in half. I iterated from left to right, doubling the distance in time for every reminder (up to 1 month). Similarly, I iterated from right to left, doubling as well.

But there was a big problem with that solution. If often happened that two reminders in the middle were either: 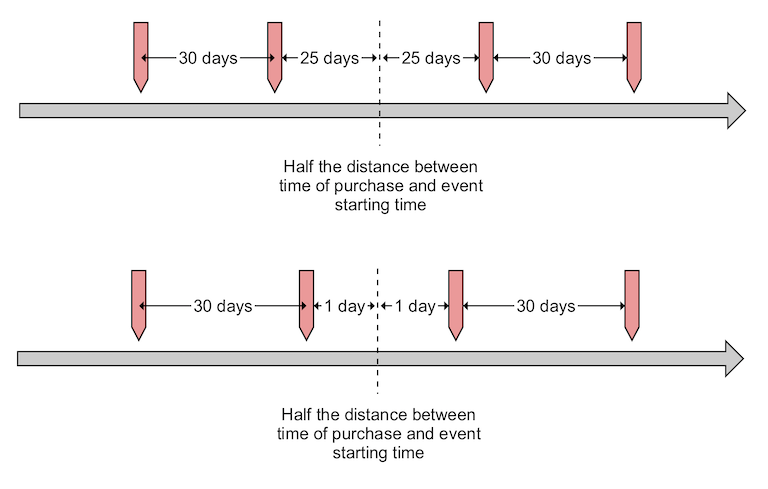 I tried about 3 different approaches and all failed the same way.

You see… The problem was that I tried to iterate from left to right, from right to the left and combine the solutions around the middle. What worked for me instead? Iterating from both sides at the same time.

The whole solution is around 12 logical lines of code in total :)

Because the time distances between the purchase and the event are no bigger than a few years, I was not worried about possible stack-overflow. In longer periods of time, we need about 6 method calls to compute reminders for a whole year.

Subscribe to our newsletter to always receive best discounts and free Ruby and Rails lessons every week.