Chillout.io architecture is distributed - currently just as few processes on same production server. As professionals we decided to prepare integration tests for each of application (maybe in terms of their business we could call them acceptance tests), but that wasn’t enough - we wanted to expose business scenarios that we’re actually aiming in. We achieved that with fully black-box tests. Curious how we did that? Read on.

Chillout.io purpose is to help Rails developers maintain existing projects - currently react on exception events and be up-to-date with simple business metrics like model creations. To provide this features its backend is splitted into following apps:

It has also gem dedicated to Rails applications, which communicates with our API.

To test whole stack we have to run all apps + Rails server. Let’s have a look at our AcceptanceTestCase class:

Business scenarios - stories or use cases - are defined with high-level terms, i.e. “Someone created model in Rails app, so at the beginning of next day (when scheduler trigger) owner should get email with report containing model’s counter increased by one”. To expose that business, our product’s real value, we use same terms in tests:

Here’s an explanation what really happens in scenario:

As you can see all steps of this scenario are described in terms of real usage. If we’d describe how our product subcomponents cooperate to handle this use case it would look like this: 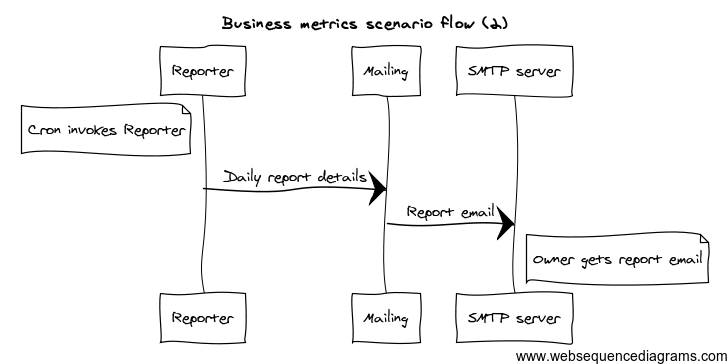 As a side note: approach of tests with actors was introduced in bbq gem.

As you can see it is about what scenario actor’s will do in real life - one of them will get to Rails app and create some entity, scheduler (cron) will invoke daily report at given time, and then Rails app’s owner will go to web mail and see our notification.

All details about our architecture are not available on scenario level. If we decide to split one of our apps to few smaller we will just have to add new commands to run in AcceptanceTestClass. We can also show it to you to tell you about our new feature - automatic simple business metrics.

Make sure to check our books, videos and bundles