This is a content which was previously published as a mailing campaign in the Arkency Newsletter. This promotes our new book - Frontend Friendly Rails which is available on sale now. Use FF_RAILS_BLOG to get 40% discount on the book, which you can buy here.

ECMAScript 2015 is the new standard of JavaScript, popularised mostly by communities around React.js view library. While Angular people chose TypeScript for their language of choice and Ember is (mostly) unopinionated about it, React people tend to use ES2015 extensively.

Since it’s hard to chase all JavaScript novelties if you don’t sit in it, it’s understandable that ES2015 can be a new thing to you. I’d like to present you what you can gain by using it today and what’s the best way to do it with Rails.

ECMAScript 2015 is the ’more familiar’ JavaScript

One of the most common struggles people have with JavaScript is its ‘unfamiliarity’. JavaScript is object-oriented, but in a different way than most language - it’s object model is based on prototypes, not classes. This is nor simpler nor more complex model of object orientation - just different. In fact, it has the same capabilities that classical ‘class’ object model has.

To aid developers migrating from languages like Ruby, C# or C++, ECMAScript 2015 provides a support of classes you already know and love. Compare:

Much familiar syntax is a great addition to the language. You can stick with it if you want, or learn the underlying prototype model later - it usually pays off and makes some ‘weird’ edges of JavaScript much more understandable (like the concept of context in functions).

Other problem people tend to had with JavaScript is a visibility of variables and the concept of hoisting.

Old variables in JavaScript has the function scope - that means whenever you’ll define them they’ll be bound to the scope of a function. Consider this:

In most languages console.log(f) would throw an error since f is undefined. But since JS variables tend to be scoped in a function scope and there is a concept of hoisting, the function behaves more like this function:

This breaks familiarity with other languages you know. It is because most languages use so-called block scope - so variable is visible in the block it is defined and nowhere else.

ES2015 fixes this by introducing a new type of variables which are block scoped - say hello to let and const:

The difference between let and const is that if you define const, you can’t change it later (because it is constant):

Such additions to the language are making JavaScript more friendly and familiar to developers coming from Ruby and other languages. This is a great thing because, well, no matter you like it or not, we all end up writing JS eventually… Aren’t we? :)

ECMAScript 2015 is the ‘unsucked’ JavaScript

JavaScript is burdened by its past - and certain unhappy decisions made that you must live with.

One of the most annoying is the concept of default context. If you forget to use var, let or const in an assignment to the variable, you’ll define a global variable:

That’s unexpected and it sucks. It allows you to create global variables by an accident - or shadow existing global functions with accidental values. Ouch!

There is a concept of strict mode in JavaScript. It breaks backwards compatibility in favor of providing better defaults - like fixing this default context issue.

Fortunately, since most people tend to forget to switch strict mode on, certain ES2015 features like classes or modules enable it by default. Also tooling behind transpiration today are producing “ES2015 modules” by default so strict mode is enabled for free - you don’t need to remember about adding it by yourself.

Next thing, coming from the way how JavaScript works under the hood is the idea of context binding to functions. If you write a class in Ruby, no matter how you call the method, the context (self or @) will be the object from which you called this method.

This is not the case in JavaScript. Due to its prototypical nature, they decided to compute the context when a function is called. This is not necessarily a bug (for me it’s a feature), but it is very surprising to many:

In this case calling fn set the context to default one - so window. Since window.x is undefined and the number is added here, the result is NaN.

Specifying context works different than in most languages that are using lexical binding of context.

This is also the reason of the pattern you may often see in jQuery code:

This that pattern is because context is not lexical scoped. This is powerful concept, really, but often you just want to refer to the lexical context, no matter what.

Not only it’s more concise than function syntax (which comes in handy if you don’t care about the context at all), but also provides a nice feature of having a lexical context. This has tremendous effect on typical frontend code that is being written - making it easier to read, more concise and less surprising.

ECMAScript 2015 is the ’more convenient’ JavaScript

Arrow functions are one thing that is making writing typical code in JavaScript less tedious. But there are more features that are making writing code more pleasant.

First feature that was lacking for a long time is string interpolation. ES2015 provides it by wrapping your string content with backticks:

Unpacking objects and arrays is so common operation that ES2015 provides a special syntax for it called destructuring. Just see it in action to see how useful it is:

Looking innocent, this saves you a lot of tedious writing.

There is also a change to defining functions. You can supply default arguments and use spread operator to work with variadic functions:

The last addition that is extremely useful is enhanced object notation. It’s better to see it by an example:

There are many more. Those are only that I’m using in my day-to-day work, making my work more pleasant. There are generators, iterators, new for syntax and so on. That being said, there is a lot of sugar added to JavaScript - a sugar which makes you way more productive once you master it.

ECMAScript 2015 is the ’modular’ JavaScript

Last, but not least. Before ES2015 JavaScript had no syntax for building modules. There were technologies and standards that allowed your code to be modular (CommonJS, RequireJS…). But with ES2015 modules became first-class citizens, having its own syntax. It allows your code to hide implicit details of implementation, relying only on the public API. Not to mention it makes your dependency control way easier:

You can use destructuring, make default or name imports:

This allows you to structure your code way better and with concise syntax. Previous solutions like using IIFE was quite verbose - here you have nice syntax and (soon) native support for modularization of your code.

As you can see, ES2015 brings much into the table. Not only it’s more convenient to use, but also comes with many great opportunities (better stdlib, modularization, TCO after being implemented by browsers natively) for today and future.

Unfortunately, having all of it with Rails is not that super-easy.

First of all, Sprockets will support ES2015 starting from version 4. If you have a new version of Rails, you’re probably using version 3, which only has an experimental support. Even with this support, load system of Sprockets kinda doubles your work if you want modularise your code.

What’s more, this technology is developing in a very rapid pace, so tooling is constantly evolving and the best of tools are available on Node.js-based stacks.

Does it mean we’re doomed and we can’t use this stuff?

Of course we can. You can use experimental support in Sprockets if you want or use many gems that are trying to add the support for it. But the most robust solution for me is to add a separate, Webpack-based stack. There is SurviveJS book about it (grab it - it’s cool!), which is also teaching React.js which is quite cool technology. There are also many articles in the web.

In fact, for me it’s so important I’ve made a big chapter about it in my “Frontend-friendly Rails” book. It seems people are struggling with it, so I’ve decided to make a step-by-step process of constructing the whole stack from zero to a complete solution.

And you can buy it now. 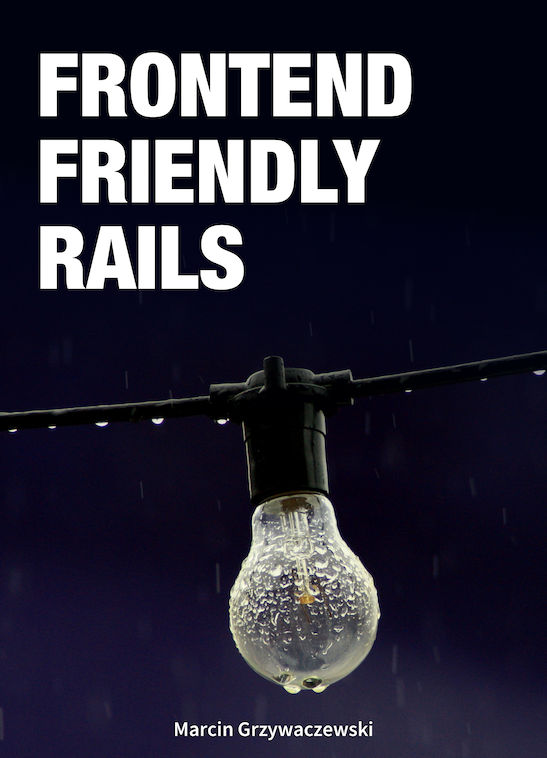 Finally I managed to write this book :). It’s a set of good practices and techniques I’ve worked during my work on couple of projects I’ve worked so far. This book is about making Rails more friendly to your frontend, making it easier and faster to write, as well as more powerful and maintainable.

I had tons of fun writing it and I’m using those techniques in my day to day work. I hope you’ll find it useful too in your projects - hours of development in Arkency proved me those are battle-tested solutions to real problems.

It’s the beta version of the book. If you buy it now, you’ll get all updates for free.

Just enter FF_RAILS_BLOG as a coupon code to get 40% discount for this book. The original price is $49 and you’ll get it for less than $30!

Book has 97 pages of exclusive content now + bonus chapters, so it’s 154 pages in total. If you don’t like it, we have an eternal no-questions-asked refund policy - just drop us an e-mail and you’ll get refunded.

The following topics are covered in the book:

I’m available to you for all questions about this book. Just drop me a comment I’ll try to clarify everything you may need to make a decision whether this book is a good choice for you or not.

Techniques I’ve described in the book made my work better and allowed me to write better Rails API applications. I hope you’ll find the book as useful as I’m finding those techniques.

Listen to the podcast

Is listening a your kind of consuming content? You can grab a 30-minute podcast where we discuss what you can find inside the book and what were our motives to write it:

You can also download it in the mp3 format and see the shownotes here.